Some time ago I wrote about how the food security in Iraq had been affected by decades of war and suppression by the Iraqi regime. After researching and summarizing that subject I decided to investigate if changes in agriculture, potentially induced by conflicts, were visible in satellite images in my own study area, the Duhok Governorate.

In this sub-project of my PhD dissertation I decided to combine remote sensing approaches, such as crop phenology, with contextual knowledge about the history of Kurdistan Region. I therefore focused on agricultural changes that can be temporally and spatially associated with Al-Anfal genocide in the late 1980’s.

Last week I presented some early findings of this research as a poster at the AGILE conference in Spain, now published as an abstract in the proceedings of AGILE’2014 International Conference on Geographic Information Science. Even though my topic was a bit off, I had some interesting discussions with people curious about my research.

In short, what I did was to look at differences between spring and summer NDVI for Maximum Value Composites (MVC)’s over 4 years (to omit issues with clouds and fallow practices). To detect agricultural land that is usually being harvested in early June, I classified cells with a strong decrease in NDVI after harvest time as cultivated. 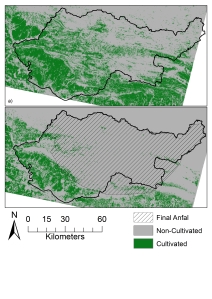 Cultivated land before and after the Anfal genocide

But what does a genocide really have to do with agriculture? This is where the results need to be put into context. Before the genocide in the late 1980’s, the Duhok governorate was a largely agricultural and rural province. Kurdistan region has always had a high water availability due to its mountainous geography and therefore accounted for a large part of the agricultural production in Iraq. The Anfal genocide that I’ve written about before basically led to a shift from rural to urban lifestyles. People were forcibly moved, displaced, to cities and urban complexes inside Kurdistan and abroad, and were therefore prevented to work on their lands. Furthermore, much agricultural land, as well as villages, were destroyed by bombs. There is a general saying that the Kurdish people of Iraq changed from producers to consumers and several reports emphasize the effects on agriculture, even though no quantitative assessments have been presented.

The next step in this research is to move further on in time and look at the state of agriculture after the initiation of the Village Reconstruction program in 1991, and the current state, 2013-2014. A refined approach would also focus on crops that are not harvested in June, and on other land covers that might have been associated with these changes, for example urban areas.

3 thoughts on “Conference Poster: The Anfal Genocide and Agriculture in Iraqi Kurdistan”