A few days ago, the third paper in my thesis were accepted and published in Ambio – A Journal of the Human Environment, after a few rounds of revisions.

I had had the idea for this paper since 2013 when I read Choman Hardi’s book about Anfal and realized that the Anfal Campaign’s forced migration and destruction of villages must have had land cover effects that could be detected in satellite images. I started looking at coarse resolution GIMMS NDVI data, since it had good temporal coverage, from 1981 to 2006 (Anfal was 1988). Unfortunately, the coarse resolution (8 km) did not show any pattern changes, neither with regular trend analysis, nor with Principal Component Analysis. At that point I found myself wishing that MODIS would have a temporal coverage dating back to the 1980’s.

Eventually, I started browsing the Earth Explorer for Landsat images of Duhok. I realized that there were quite a few, but I wasn’t sure how to use them for land cover classification. Which dates were best and how many images would I need to classify to get a representative result? I remember reading de Beurs and Henebry’s article “War, drought, and phenology: Changes in the land surface phenology of Afghanistan since 1982” and realized that the temporal dimension could be used for detecting cropland, not only the spectral differences. I started reading more and more about how land surface phenology or crop phenology worked and started making plans for testing this on my Landsat data, to see if I could get something out of it. At that time I was quite busy with my other paper’s that I had planned to finish, so I needed an incentive to actually do this analysis. That came when I was asked by my supervisors to submit a short paper as a contribution to a conference on GIS. I started with a more theoretical idea, but then I got bored and instead started playing around with the data. In a few days I had classified two periods, late 1980’s and early 1990’s, and was able to write a 2 page paper about the initial results which landed me an invitation to present a poster at the conference. When we got back from the conference I discussed with my supervisor and decided to make this paper part of my thesis. It sounded like an easy job to just extend a 2 page paper into a few pages, but the process is always more complicated that you think at first. I have had to redone the analysis a few time due to small errors, data issues and updates, not to mention the requests from reviewers (who indeed helped improve the paper substantially from it’s initial form). All in all it has taken me a bit less than two years from the first thoughts to publication, but I’m glad that it’s out there. The classified cropland areas can now be used in further studies, both quantitative/ spatial and qualitative. 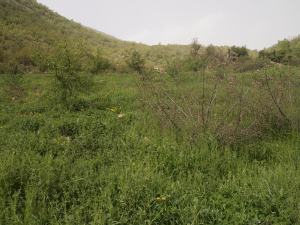 The destruction of land and forced migration during the Anfal attacks against the Kurds in Iraq in the late 1980s has been reported to have severe consequences for agricultural development. A reconstruction program to aid people in returning to their lands was launched in 1991. To assess the agricultural situation in the Duhok governorate during the pre-Anfal (A), post-Anfal (B), reconstruction (C), and present (D) periods, we mapped winter crops by focusing on inter-annual variability in vegetation greenness, using satellite images. The results indicate a decrease in cultivated area between period A and B, and a small increase between period B and C. This supports reports of a decline in cultivated area related to the Anfal campaign, and indicates increased activity during the reconstruction program. Period D showed a potential recovery with a cropland area similar to period A.