While war is detrimental to most parts of society (except for the weapon industry), the environmental effects are often forgotten in all the suffering. That makes a lot of sense of course, who cares about the environment when people are dying, fleeing for their lives, and children are deprived of their childhoods and futures? But we need to remember that what’s bad for the environment is actually bad for OUR habitat and affects the quality of the water we drink and the air we breathe. Therefore, it’s important to understand the environmental damage created by conflict, in addition to the humanitarian damage.

The study areas I’ve focused on all have one thing in common (maybe more): conflict. I did my PhD on Iraqi Kurdistan and continued in my Post Doc project to work on Syria and Iraq. I also did work on Palestine during my master. My research has mainly focused on the question of agriculture in times of conflict (and after), asking questions like “How did the Anfal genocide affect the agricultural sector in Duhok?” and “What happened to the land use in areas taken over by the Islamic State in 2014/2015?”. Although more attention has in recent years been given to land systems in conflict contexts, the interactions are complex and the topic still needs much more research.

Agricultural land is something that we generally understand is important to us, to grow food and other products. It’s, however, not always as obvious how dependent we are on a stable ecosystem, healthy forests and wildlife. In the past few weeks I’ve read and thought more about the conflict related destruction of nature.

An example of this is how the conflict with IS in 2014 led to the increased and illegal cutting of trees in Kurdistan Region (Iraq). Heating oil shortages led to an increased demand for fuel in wintertime. The war with IS meant that forces designated to protect natural areas were needed at the front lines. Combined with a general lack of environmental concern this reportedly lead to an increase in deforestation, especially in the mountains.

As a researcher I’m of course interested in the extent of this deforestation and therefore see a need for scientific research on the topic. In a classification of land cover in Iraq and Syria we distinguish between four land use classes over the course of 17 years (2000-2016). The land use classes are Bare soil, Cropland (one harvest), Cropland (two harvests) and “Other vegetation”. This last class includes mainly natural vegetation, such as pastures and treelands, but it also includes fruit plantations. However, it gives an idea of where the natural vegetation is located and this data could be used to better understand what has happened to the forest and woody vegetation in Kurdistan since 2000. 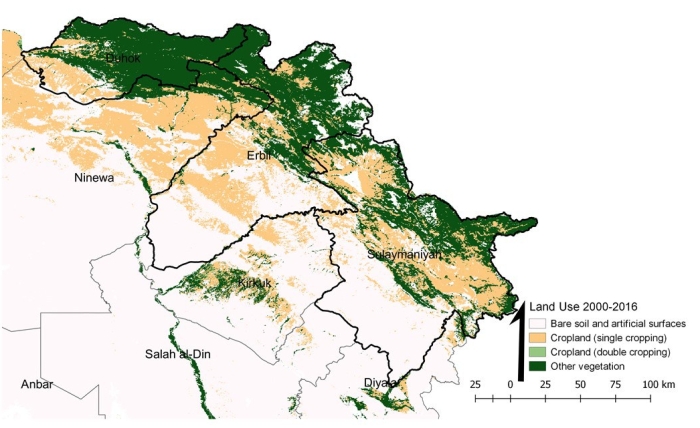 Above is a map showing where this “other vegetation” class is to be found. As expected it’s mostly located in the more mountainous areas that are difficult to use for croplands, due to topography and accessibility. Below is a time series of the four different land cover classes, and some relevant events. We see that the extent of “other vegetation” shifts throughout the years. Between 2000 and 2006 it generally increases in extent. Then, during the drought period of 2007-2009 it decreases a bit. After 2010 it starts increase again. After 2014, with the expansion of IS in areas near the KR, we start seeing a decrease in extent again. 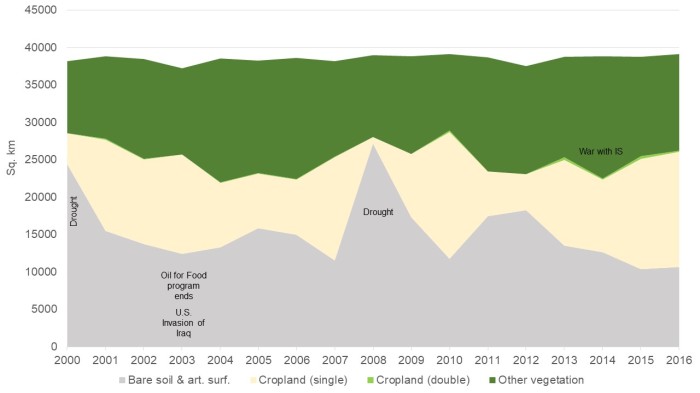 Whether these post-2014 decreases in extent of forest and other treelike vegetation can be explained by the political situation is hard to say. We also do not know if there are classification errors that affect the classification for each year. One thing we do see after 2014, as reported in a publication from 2017, is that cropland increases in extent in the Kurdistan Region. The extent of bare soil is decreased, and so is also the extent of “other vegetation”. Does this mean that both bare soil and natural areas were converted to croplands? In order to answer such questions, more detailed level research is needed on the areas that post-2014 show changes from bare soil or other vegetation, to new cropland.

What does this mean? If the classification is correct then large areas of “other vegetation” have been converted to cropland (with one harvest) after 2014. Is this the effect of deforestation driven by the need for fuel wood or the need for more cropland? We can only speculate at this stage. But I would suspect that cutting down trees for fuel wood only would lead to a conversion to bare soil, not to cropland. Maybe, however, there’s more to the story?

So many interesting research questions and so little time to answer them properly. 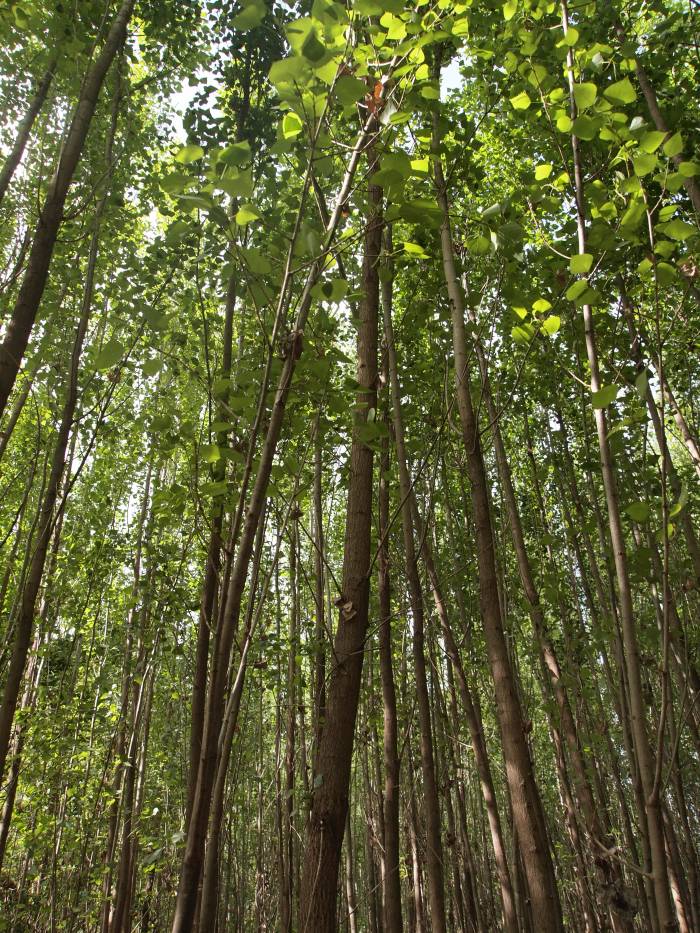 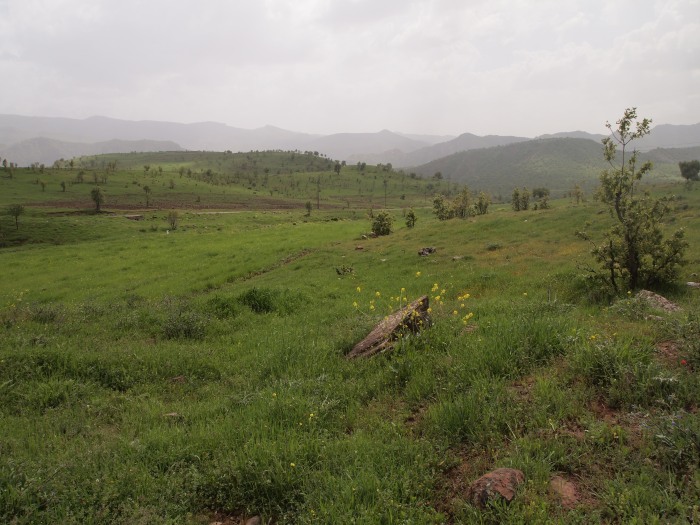 Example of “other vegetation” in Duhok

3 thoughts on “Mini-study: Conflict and nature in Iraqi Kurdistan”